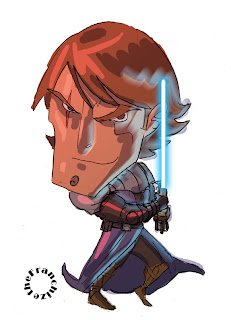 So after months of networking and knocking on doors I finally have a shot at working on an officially licensed Star Wars project! It is the Clone Wars season 2 sketch card set. I'll be working on a bunch of cards that will go straight to the hobby market and a bunch that will be headed to retail stores across America. I have been doing sketch cards for a while now working on characters i have loved since I was a kid, but to actually have an opportunity to work on Star Wars is more than I could have hoped for.

My deadline on the project is pretty tight though. I'll be doing about 17 cards per night for the next 2 weeks straight plus a bunch of caricature gigs next week and a few other projects that need my attention. Then at the end of the Month is the Baltimore Comic con.

I did the sketch of chibi Anikin as a warm-up before I jumped into sketch cards last night. I figured I would throw some quick colors on it and share it with yall.

2020 convention schedule dates to be announced!