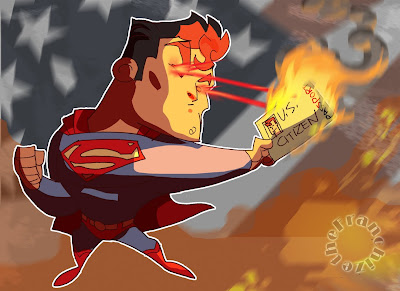 Why is it that things have to bee so tough? Sometimes it's like the world just can't throw enough crap my way. Money is tighter than it has been in quite a while which makes everything tough, plus gas has finally reached over $4.00 where I live. Even Superman has given up on "truth, justice and the American way". I think the worst part is the mood I've been in lately. It's hard to stay motivated when so many things seem to be stacked against me. (Sorry for all the venting folks)

Now that I've gotten the belly aching out of my system I know what I really need to do is buckle down and make something happen. No matter how tough things are I'm not built to quit. There is a great quote from Superman III...little Ricky finds Superman who has been affected with some new kryptonite in a bar getting drunk and terrorizing people with his heat vision. Ricky tells Superman that "He's just in a slump. He can be great again!". Right now I know I'm in a slump, but I can be great again too.

So I'm not giving up. It's time to get down to business and prove that I really am the "World's Greatest" (those that know me best will know about that).

Next week I'm sure I'll have better news to report. I'll keep my fingers crossed.